As always happens with us, we had a late start. It was a bit rainy and a bit cold so we decided to splurge on a motel last night. It wasn’t a great motel. The floors were grimy, the beds were small, and the walls were thin.  It took forever for the kids to sleep and they were up again by 6:30am.

That said, we were happy to not have to repack wet gear this morning. We arrived at the access point at 9am and after a bit of creative packing, we were off by 9:45 am. Trev warned me that the trek in was longer than our most recent trips to Rock Lake and Penn Lake but not by much. He also said that there was a winding river that we would be traversing.

What you don’t see on this map is Round Lake itself.  It is a bit longer than what you would imagine the beginning of North Tea Lake to be on the map above. That paddle was uneventful. The conditions were prefect and we only had some minor waves in the middle of the lake, which is to be expected on a body of water so large. Then we were met with this sign: 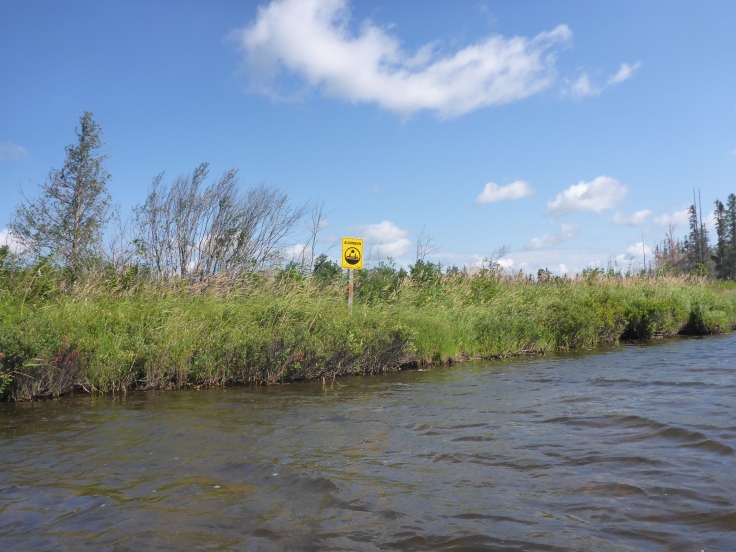 We were now officially in Algonquin Park. The river was not quite what I had expected. What is depicted on the map above is very misleading 🙂 It’s not simply a lazy river – it is complete with many hairpin turns. The lack of rain made the river feel about as wide as a beaver trail in some places and it was overgrown with long grass under the water, as the levels were a good foot below normal. It was beautiful though. We were surrounded with birds, frogs, ducks and there were so many awesome sounds of nature. The sea grass made us slow down and take everything in. Trev kept throwing frogs into the boat on the kids to pass the time. Fortunately, we only got stuck once (not including the time I missed seeing some rocks and we crashed a little bit). 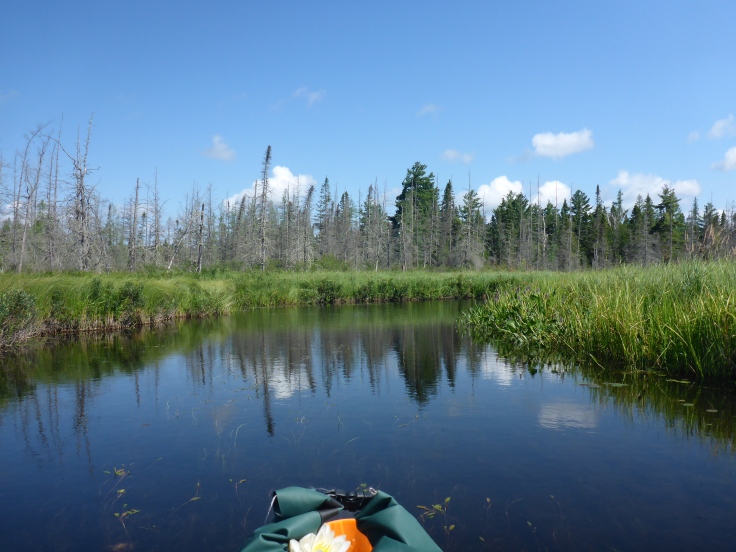 The big adventure was going over a beaver dam – a first for us with a fully weighted canoe. That said, it actually went quite smoothly. We will see how we do going back UP it on our return trip.

On our trek down the river, we saw two muskrats – even watched one in his burrow which was such a privilege. We also saw two mother ducks with their half-grown ducklings and a blue heron in flight. There were so many frogs, the kids dubbed the river Frog Creek after their favourite children’s books (The Magic Treehouse).

Two small portages later and we hit Tea Lake. After that it was canoeing in much more familiar conditions. We timed it just right. The water remained calm essentially until we got to our site, when the wind picked up and the waves got a bit choppy. We did hit a tiny rainfall at one point, but while the drops were big, it didn’t last. The boys pulled the tarp they were sitting on over them and Ria remained my staunch little buddy in front of me. Within 10 minutes though the sun came out and everything dried within short order once we reached our site for the night.

Tonight we camp up from the water – on a grassy flat which is atypical for Algonquin. This site is so large it seems it could easily fit six tents up here. There is a beach below us but it is rocky so we will likely move on tomorrow once our cousins join us. The space is nice, but we are always after sand.

We got here at 2pm. It’s beautiful out here. This is God’s country. Odin had a great time chasing red squirrels today, though they are NOT happy with him. The kids caught several crayfish in the water but are now fast asleep in the tent.
Trev and I are sitting here, watching the sun set over the lake, and about to enjoy a glass of wine to finish off an eventful day.